What Shade Are You?

I was honored to be asked to participate in a blog hop featuring Cotton Supreme Solids from RJR Fabrics.

I felt overwhelmed when I opened the envelope from RJR and looked at the color card I had been sent. There were so many beautiful colors that my brain seized up. I could pick any palette I wanted, but WHICH one? After I worried about it for a few minutes, I made a deal with myself that I would open up the color card again and instantly choose the one color that I liked the best for the beginning of the palette. So, I did.

I was pondering what colors to add to Syrah when we visited the little town of West Liberty, Iowa one Saturday afternoon. We went to pick up items from some friends that were moving, then stopped at a fun panaderia for a treat.  After picking out a variety of rolls, cookies and pastries (for $4.50!!!), we drove around looking for a place to eat. We found the beautifully restored Rock Island Depot and I started getting excited. Syrah was everywhere! The building was several tones of gold and was accented with a deep terracotta tiled roof and surrounded by burgundy paving bricks. There was a red caboose out front and an old green wagon parked near a door. While I looked around, my children eagerly tore into the rolls and were surprised to find one filled with a delicious orange sugar paste. They played on the playground and ran back between adventures to cram in another bite of something delicious. The sun was warm, the sky blue, and the day peaceful and pleasant.

Here is a link to some pictures of the Depot if you'd like to take a virtual look around.

I decided to memorialize that wonderful day into a quilt. I ended up choosing 20 colors from the color card (one was even called croissant, how perfect is that?) and piecing in thin strips of several brown shades. I cut each strip at roughly 3/4," so depending on my seam allowance each one of the lines is about 1/4." I'm not sure if the idea for using the brown lines came from thinking about railroad tracks, but I do know that I was looking for a way to help unify all the colors. I had the thought that all of the different color voices were singing the same song, so I named the quilt "Harmony." 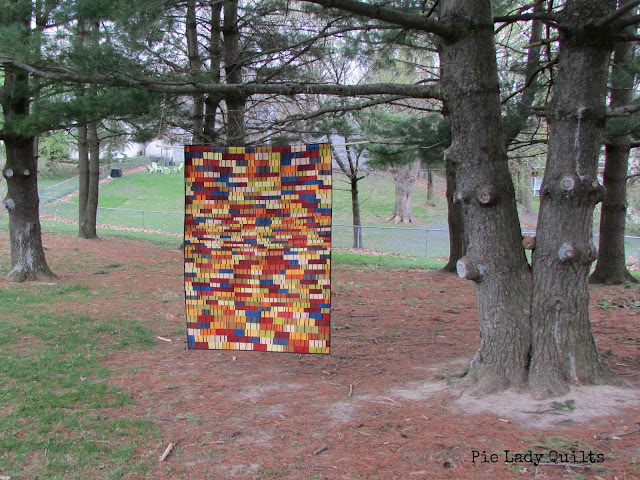 Originally, I had all of the blocks cut at 4 1/2" wide and set vertically. I liked it. I wondered if I could change it up a little bit and turn my like into love. I sliced into blocks I had already made and flipped them over to a horizontal set. That did the trick. I also tried graduating the width of the strips for a little more interest. 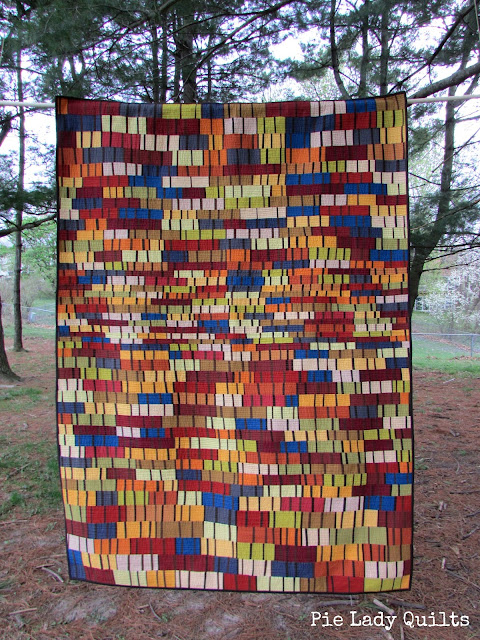 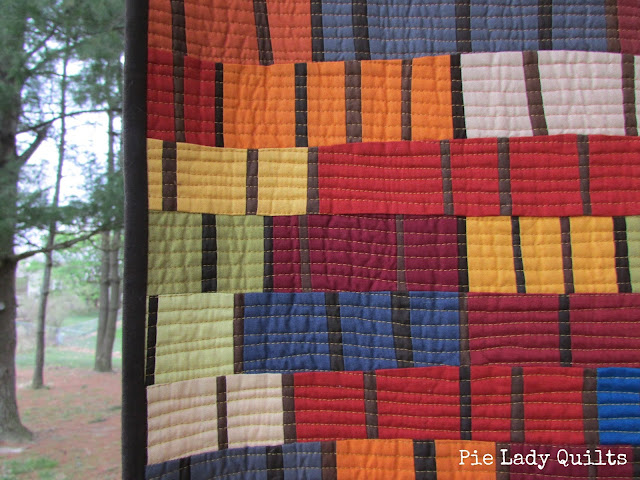 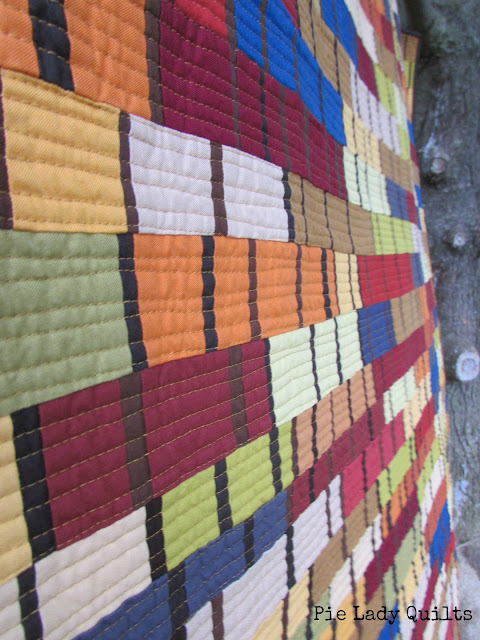 Slicing into the blocks wasn't the only surgery I performed, either. I basted this quilt very early in the morning while it was still dark outside. In my defense, I am normally a very careful baster because I adore flat quilts and generally use solids in my backings (where every pucker is completely visible). When I laid the flimsy on top of the batting, I must have been lining it up with a shadow instead of my tape because the quilt went on completely skewed. Of course I didn't notice this before I trimmed off some of the excess backing fabric. %$#@! At that point there was nothing I could do about it but start over, and that seemed pretty drastic. I started doing the straight line quilting and tried to hope for the best. I had quilted about half of the quilt and was growing more disappointed by the minute. Who wants to feel that way when you've spent so much time piecing the top? That's when I embraced a new quilting maxim.

Once is a mistake. Twice is a design element.

I created another strip of striped fabric and cut away some of the backing fabric in a diagonal that went the opposite way. I carefully attached my new fabric panel and then pressed the unquilted portions obsessively to make sure I preserved my flat finish. Voila! If anyone asks, I totally meant to do it. Just consider my backing to be social commentary on how we are "greater than" our mistakes. 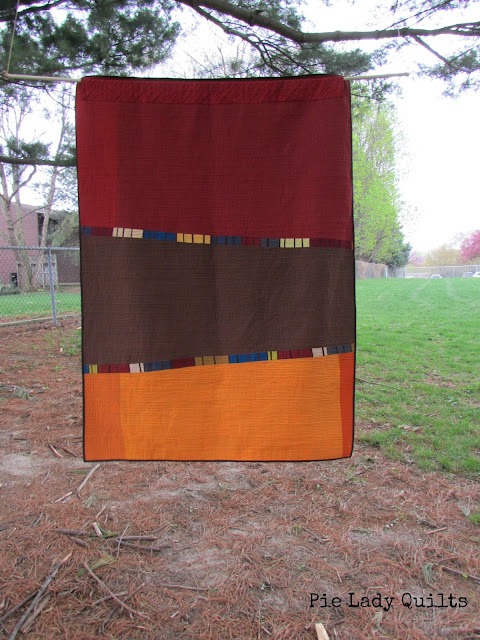 I knew there would be a giveaway with the fabrics I used in this challenge, and I could just hear the winner saying, "Gosh Jill, thanks SO much for ALL THE BROWN!!" With that in mind, I brought Syrah back out for another go.

I love to listen to music while I sew, so I peruse Spotify a lot looking for great playlists. One day I found the perfect match. The album was called "Feel Good Folk Pop." I'm not a big one for assigning labels to who I am and what I make. I am a quilter. Period. But, I could totally see myself claiming the label of a "Feel Good Folk Pop Quilter." I listened to that album the entire time I worked with this quilt, starting with fabric selection and ending with the last few stitches of the hanging sleeve. The vibe is strong, so you can imagine my despair when I noticed a few days ago that Spotify had changed the name of the album to "Feelgood Acoustics." It just doesn't have the same ring. :-( 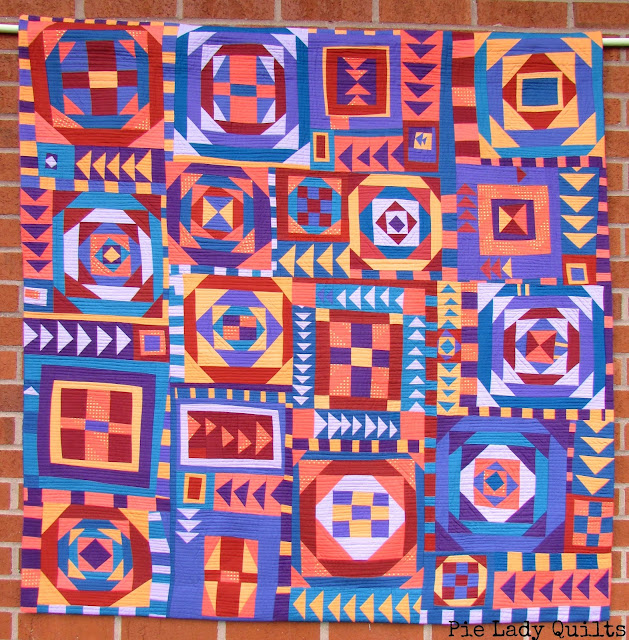 I didn't have an overall vision for the quilt when I started, I just knew that I would do a log cabin variation. I used to add so much stress to my life trying to control the outcome of a quilt. Now I know that my strength lies more in responding to a start than in beginning with the ultimate design or a perfected concept. I like the challenge of looking at a pile of scraps from the construction of a block and using them to make the next block. The pineapples I made produced a lot of triangle scraps, so I used them to make flying geese and other triangle drawings. Inspiration sometimes comes in immediacy, too. I opened up my email and saw a message from AQS. In it, they had included a block for the AQS QuiltWeek Row Quilt called Paducah Row (here is a link). I thought it looked neat, so I altered the proportions and made the chubby crosses that are sprinkled across the quilt. Mostly I just sang along with my playlist and made blocks. If I really liked them, I made more variations. If I sort of liked them, I stopped there. I had so much fun experimenting with this quilt. I think you can probably tell that it was a happy experience for me.

I made two important design decisions in this quilt. The first was choosing to quilt with invisible thread. I started considering how to handle the quilting after I saw the huge color contrast I had in the blocks. I auditioned lots of colors, including some exact matches, and was unhappy with all of them. In frustration, I called my friend Sarah who is a longarmer and former art teacher. She talked me through my options and taught me some basic color theory, the gist of which being that I had a quilt full of complementary colors and finding a thread color I could live with would be hard. I was nervous about using invisible thread, but my concerns were unfounded. I found a spool at my LQS (thanks, Cassie!) and bought a pack of tiny 65/9 needles. I didn't have any problems with melting, stretching or popping. Most importantly, though, the colors and piecing were allowed to shine.

The last important decision was choosing to face the quilt rather than bind. I knew the quilt wasn't perfectly square (that's hard to do with a free-pieced quilt if you don't plan on doing some heavy trimming at the end) and I was really reluctant to add a solid line to a quilt top that didn't have any of them. I had never done a facing before, but it wasn't too difficult. I found a tutorial from Victoria Gertenbach that was impeccably done. If you'd like to try a quilt facing, I highly recommend her tutorial at The Silly BooDilly.

"Feel Good Folk Pop" finishes at 49" x 49" (ish). I used Quilter's Dream Request batting and quilted it simply with a combination of Aurifil in Violet and Superior Threads MonoPoly. 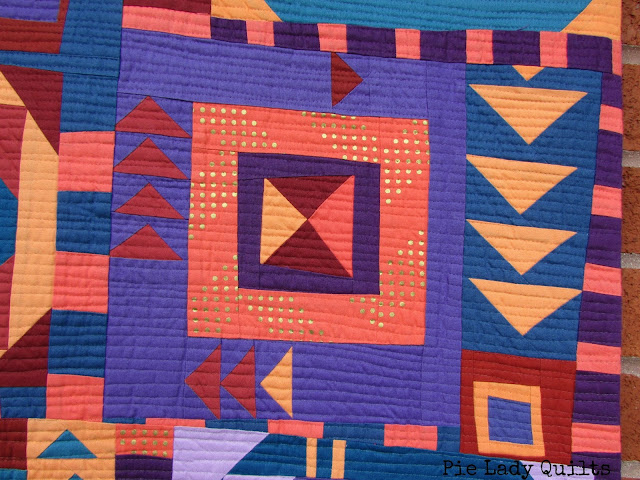 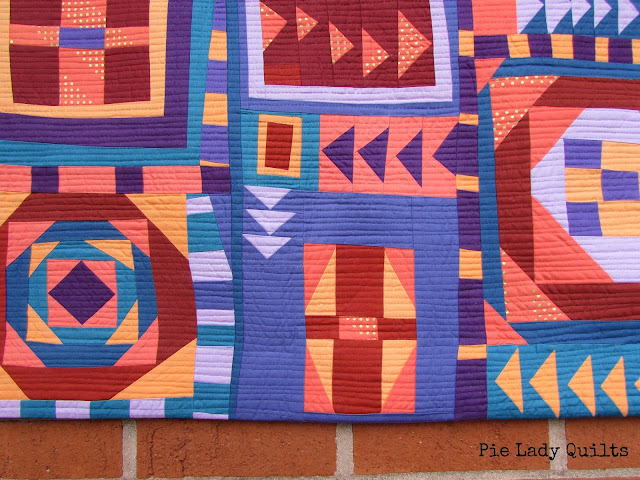 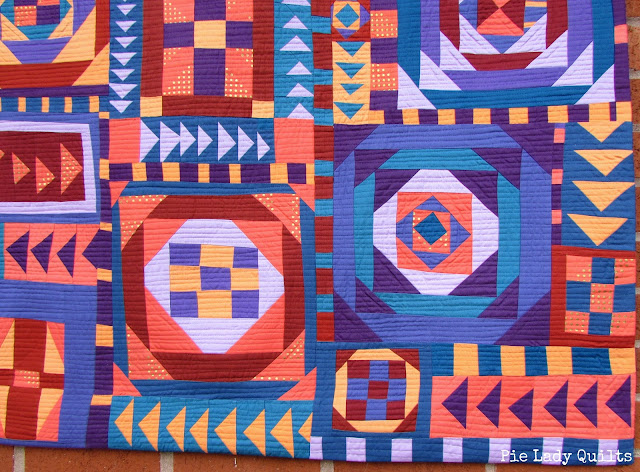 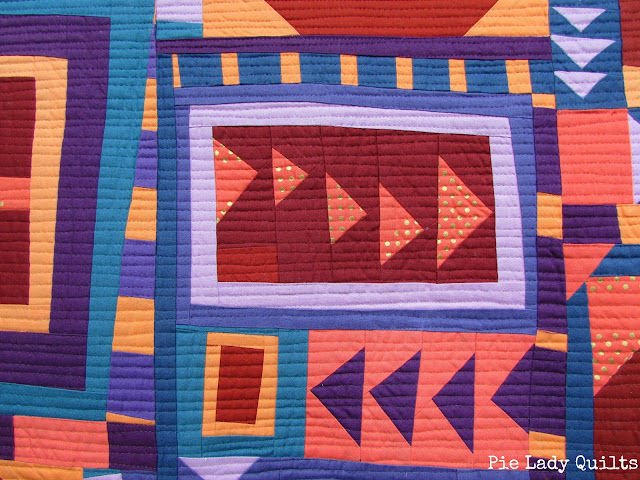 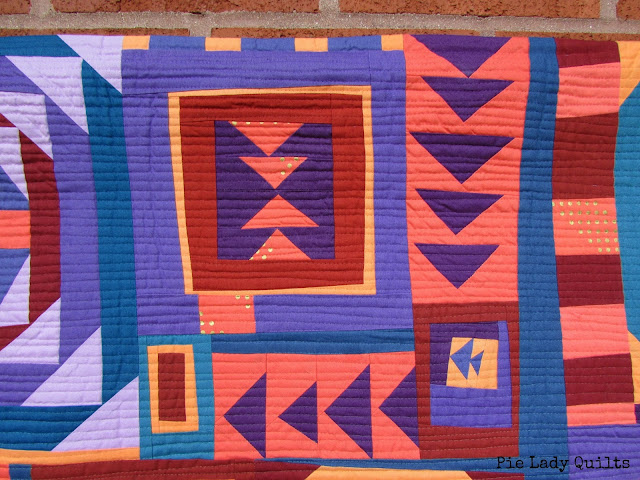 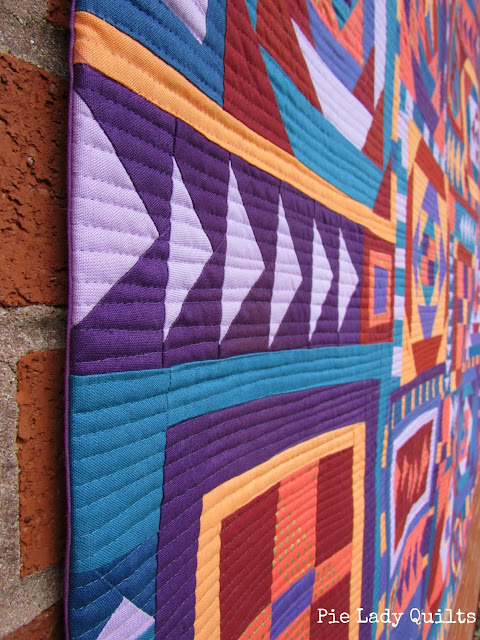 Lastly, since this is a blog post about solids, I wanted to say a few words about them. I use solids because they are cheaper, they offer a higher contrast than prints (subtlety really isn't my thing) and because I have a wider array of colors available to me. I noticed in the last year or so that I have been using mostly solids while the rest of my stash sits idle, so I decided to do something about it. Last fall I started destashing some valuable pieces. Between that and a gift certificate I had, I was able to buy 117 half yard cuts of solid fabric. Most of them were Cotton Supreme Solids from RJR. I like building a palette from the fabric itself rather than a color card (although those are nice when it comes time to reorder), and I wanted to increase the amount of choices I had. With that many cuts, you know I wasn't just picking out the colors that I liked or that appealed to me. So many times it is the color that you didn't necessarily want that you end up desperately needing. Those are the colors that are the perfect conversationalists...they talk to all of the fabrics and draw them into the group. In the last series of quilts that I did, that color was On The Rocks. If you look at that grouping, it is the very lightest gray that you see that has the slightest of a cool green tint. It was the perfect "glue" fabric. In "Harmony," the color that lifts that whole quilt (in my opinion) is Gingko, the best green-yellow I have in my stash. Finally, in Feel Good Folk Pop, the color is Denim.This color is a great background player that maintains a presence while making the other colors look good. I'll definitely be reordering yardage of that one.

Thanks again to RJR Fabrics for asking me to be a part of this series. I enjoyed it immensely.

Linking up to Finish it up Friday at Crazy Mom Quilts.