Sometimes I feel like a magpie that carries sparkly things back to her nest to hoard. My sparkly things are stories. One of my favorite things to do is to get people talking about themselves so I can hear their stories. I love reading memoirs. I grew up listening to Paul Harvey and I am a faithful listener to Mike Rowe's podcast. I am also a family historian. I research not just for dates, but for the little nuggets of personality and personal history that are recorded, sometimes accidentally. One of my most exciting research discoveries was the day I figured out why my husband's fourth great-grandfather was referred to as "the horse thief" by the generations after. It wasn't what you would think, either. Who would want to be remembered as a punchline to a joke that time had forgotten? You better believe that I wrote that one down for the ages. I found great personal satisfaction in vindicating Peter Fisher and am secretly hoping for a high-five in heaven.

My dad's cousin Bob is also a family historian and in the last few months I have discovered pictures, stories and memories that he has shared. Things that, despite my magpie tendencies, I had never heard or seen before. Definitely treasures. The next three quilts are united not only in color, but also in thought and intent and are based on what I learned. I'll share some of the stories from my dad's family along the way, too.

The inspiration for this first quilt came while my husband and I were sitting in matching rocking chairs on a veranda gazing out at a verdant green forest. We were camping, so unfortunately we were only borrowing the view, the chairs and the veranda. If there is a rocking chair in my future, hopefully there's a pair of them parked outside on the porch somewhere with a great view of something beautifully green.

The chair thing was what made me start thinking about my grandparents. One of the things that I found in Bob's submissions was a poem that my grandma wrote after Grandpa's death ( I will share it later in the post). In it she describes how hard it was to see his empty chair. It's so easy to want more and more and more. On that quiet spring evening, I thought of them and how grateful I was that the chair next to me was filled with the right guy, and that we could enjoy the simple and free things of life together.

I came home from that weekend and drew a full-scale model of "Love at First Glow" out on butcher paper, then paper-pieced in an improvisational way on top of my templates. I used an analogous color scheme and played with the values to make the triangle/pine tree shapes glow.  I got better at it the more of them I made. I am not ashamed to admit that I finished piecing the quilt, thought "I can do better" and redid ten of the blocks. Even with my remaking, I finished just in time to enter the top into the Pantone Quilt Challenge where it won! Hurray! I got the email today, though, that it was not accepted to the Modern Quilt Guild showcase in Houston. Boo. In the end though, yay or nays aside, this quilt is a winner for me because it says exactly what I meant to say in the way I meant to say it.

Love at First Glow finished at 45" x 53." I used Aurifil invisible thread to do the matchstick quilting and the super thin batting from Quilter's Dream. It is finished with a faced edge. 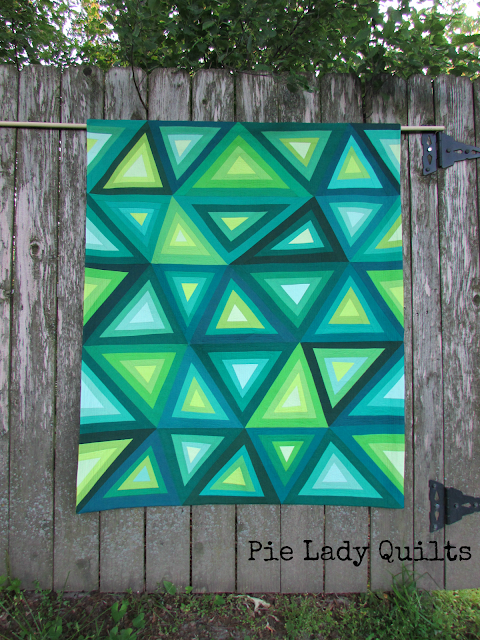 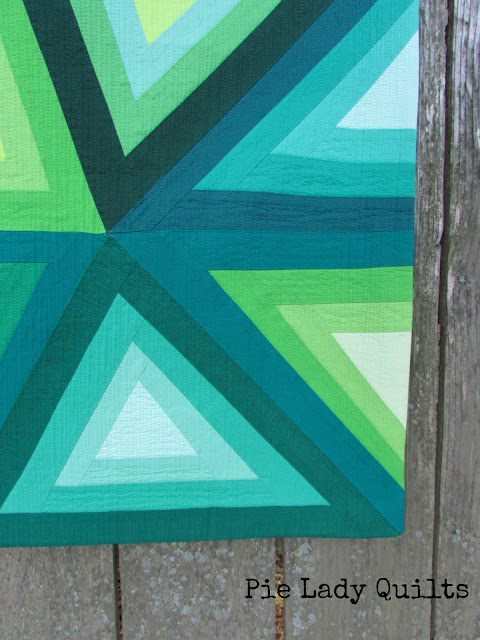 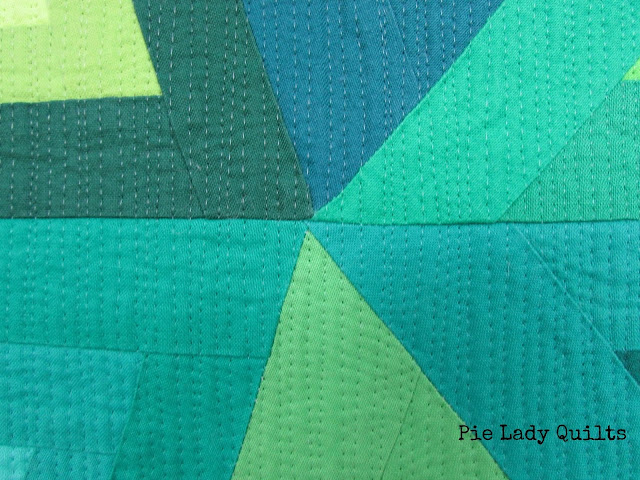 My grandparents were an unlikely combo. When they met, Grandma was already a teacher and accomplished musician. She was considering a scholarship that she had just received to study at the Julliard Conservatory of Music. Grandpa had just returned from World War I and wanted to be a farmer. After a blind date, she picked him. She taught school, elementary and English (my dad grew up having his grammar corrected daily and enjoyed passing on that bit of his mother to all of us), and taught music lessons in their small farming community. After their children were grown, Grandma decided to go back to school. She received her masters degree at age 61 and was working on her doctorate in folklore (she was in her 80s!) when my grandpa got sick. Grandma was one class away from graduating and had her dissertation completed. She picked him again. "At this point," she said, shrugging, "all they can do is put it on my headstone." Grandma's dissertation was published as a book entitled, Wood Stoves and Woolen Stockings when she was 90 years old. She never did get the doctorate.

Waiting
Life is so lonely without you
I look at your empty chair
I sorrow and wait for your coming
To take me with you, over there.

So call for me early at morning
When no one would bid me to stay
Come with your arms outstretched, dear
And together we'll steal away.

I tried to make a scrap quilt inspired by this poem in my last post. I couldn't make it say what I wanted it to so I stopped. I had to try again. "Over There" is what I came up with. I constructed it using strings left over from the piecing of the previous quilt. I did not use any foundations. Instead, I used Gwen Marston's method of cutting the desired block size out of paper and using that as a template to cut the strings to the appropriate lengths. There is not much waste and there is no paper to remove after. Win, win. This quilt finished at 24" x 24." I used green Aurifil thread to echo the strings in random patterns and left the text and orange parts unquilted. I am so glad that I had some of that text print in my stash! 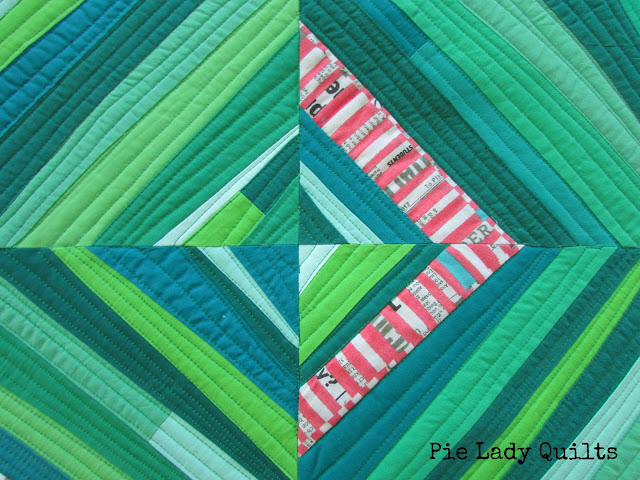 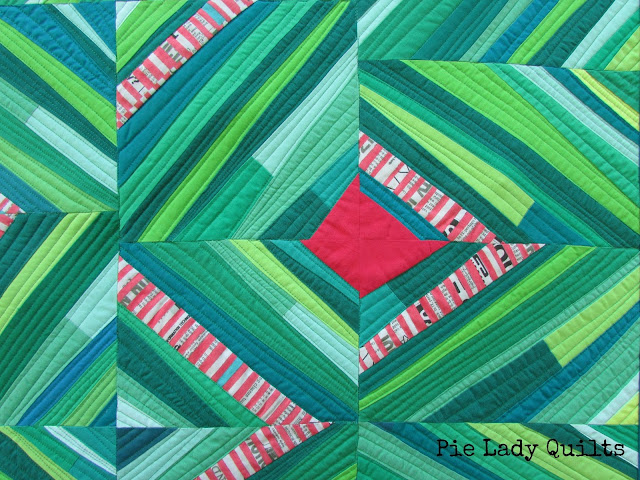 Grandpa was the yin to Grandma's yang. He was irrepressible, kind-hearted and open. He told just as many stories as she did, but his were funnier. When he was a young boy, his mother taught him to quilt just to see if he could sit down for a minute. He could do both, barely. How I wish I could have one of those blocks, if they even survived! Grandpa always had a brown flannel quilt on his lap with me on top. I remember him counting his fingers in Danish, pausing dramatically at the fingers with partial amputations from farming accidents to say the Danish word for "half" before continuing. A few years ago I talked to someone who spoke Danish and asked them to count to ten for me. The familiarity of it, even after all these years, brought me to tears.

I asked my mom how Grandpa died and from the way she described it, it sounded like cancer. She mentioned that near the end, the only thing that tasted good to him was 7Up and it sparked an immediate idea for me. He brought an incredible amount of joy to a little girl. I'm all grown up now and I hope I can give it back in the quilt version.

"7UP" finished at 40" x 40." I constructed it with 3.5" blocks and 2" blocks, which tile together really well and make random arrangements easy to execute. To replicate bubbles, the centers are the same in every block and are the lightest value in the quilt, effectively creating a hole. I love the energy that emerged from the jumble. It makes me feel happy, which is what I was going for. I used matchstick quilting with invisible thread and finished the edges with a facing. I didn't want to put a hard edge around the quilt to contain all of my bubbles. If I ever get this one into a show and run into some difficulty with the name, I think I'll go for "Irrepressible." That one's for you, Grandpa. 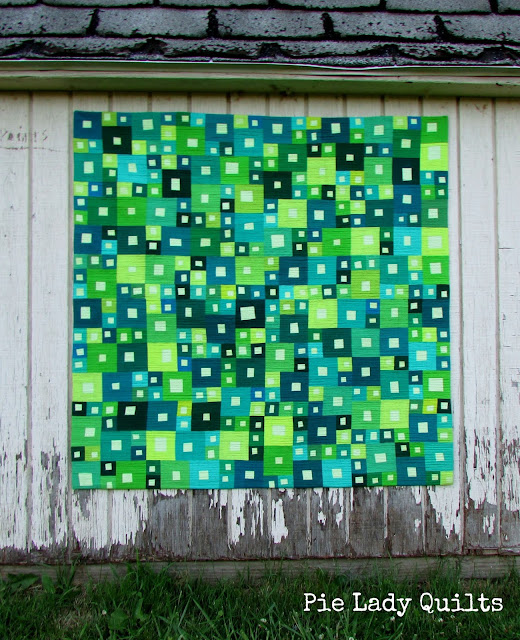 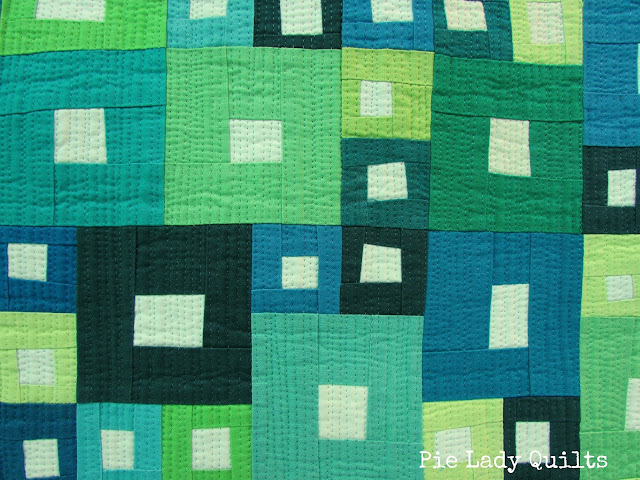 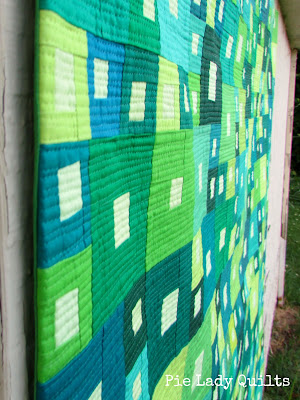 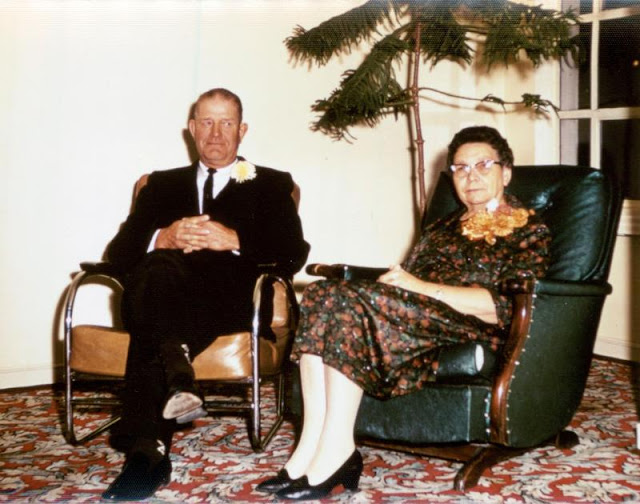 Thanks for reading along. I appreciate it!