I'm a sucker for a cute bird and I do think it's genetic.

My mother taught first grade forever. FOR-EV-ERRR. I'm going to say around 40 years. For many of those 40 years she collected things for her bird unit. A teaching unit is an excuse to pepper the school day with the subject of your choice. In reading? You're reading books about birds. In math? You are doing addition problems on a bird themed paper using bird cutouts to help you solve the problem. In social studies? You are looking at the map to show where birds migrate. In science? Well, in science you are going to diagram, hold, touch and examine anything bird related. My mom became a serial collector of abandoned bird nests and somewhere along the way, it became our family's hobby to help her. We raised Christmas trees so, luckily, we had plenty of places to look. My favorite nest that we ever found was the tiny little hummingbird nest made out of horse hair. The nest that was my favorite story was the oriole nest my brothers found. 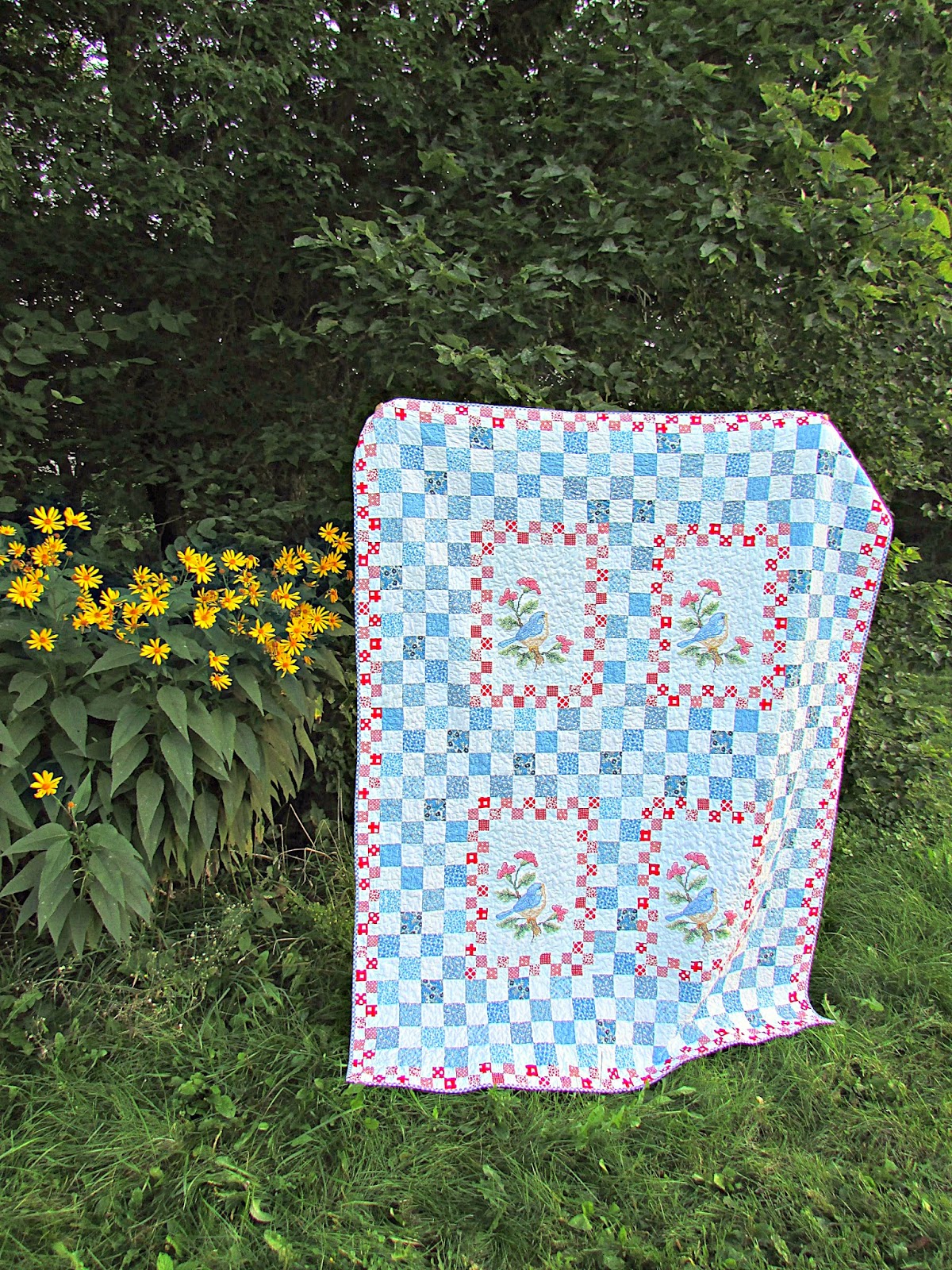 Rick and Mike (I did not change their names. I'm thinking this is a story they will want to OWN for perpetuity. If not, WHOOPS, you should have been nicer to your baby sister.) were the proud owners of a pair of .22 rifles. One fall day they headed up into the mountainside to practice target shooting with their guns. On the way home, Rick spotted a Baltimore oriole nest in a Siberian elm tree. Oriole nests are different from other songbird nests. Instead of building a nest on top of a branch, the birds build them so they dangle from a branch like a large grass purse. This particular nest was hanging about 20 feet above the ground. Now, I wasn't there, so I can't claim to quote the conversation exactly, but I can just imagine what it must have sounded like--a twelve year old and fourteen year old boy standing underneath a tree; plotting, debating and arguing about how to take down that nest. Finally, Rick (the younger boy) decided that he was going to shoot it down. Faster than Mike could call him whatever an older brother would want to call a little brother that came up with a plan like that, Rick raised the rifle to his shoulder and fired. The nest, still attached to the 2 cm wide branch (now with a bullet hole in it) dropped to the ground. Mom got to proudly display that nest to at least 20 years of first graders AND my husband gets to blanch every time one of my brothers says, "Come go shooting with us, Matt." Ahh, priceless. 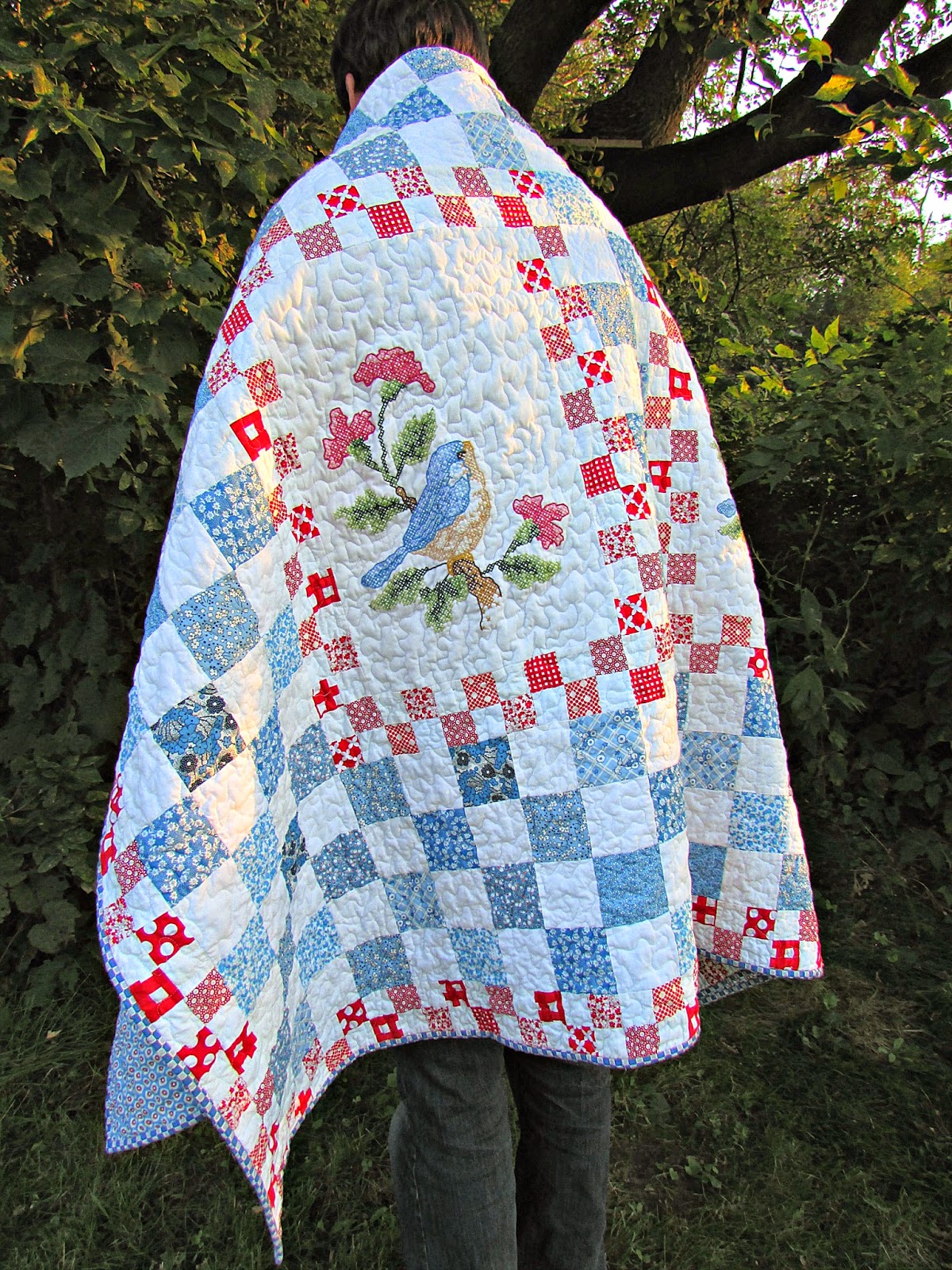 I made this quilt for my Aunt Roselle. She is the one responsible for the lovely embroidered bluebirds. My responsibility was to set them into a twin size quilt and coordinating sham without messing them up. 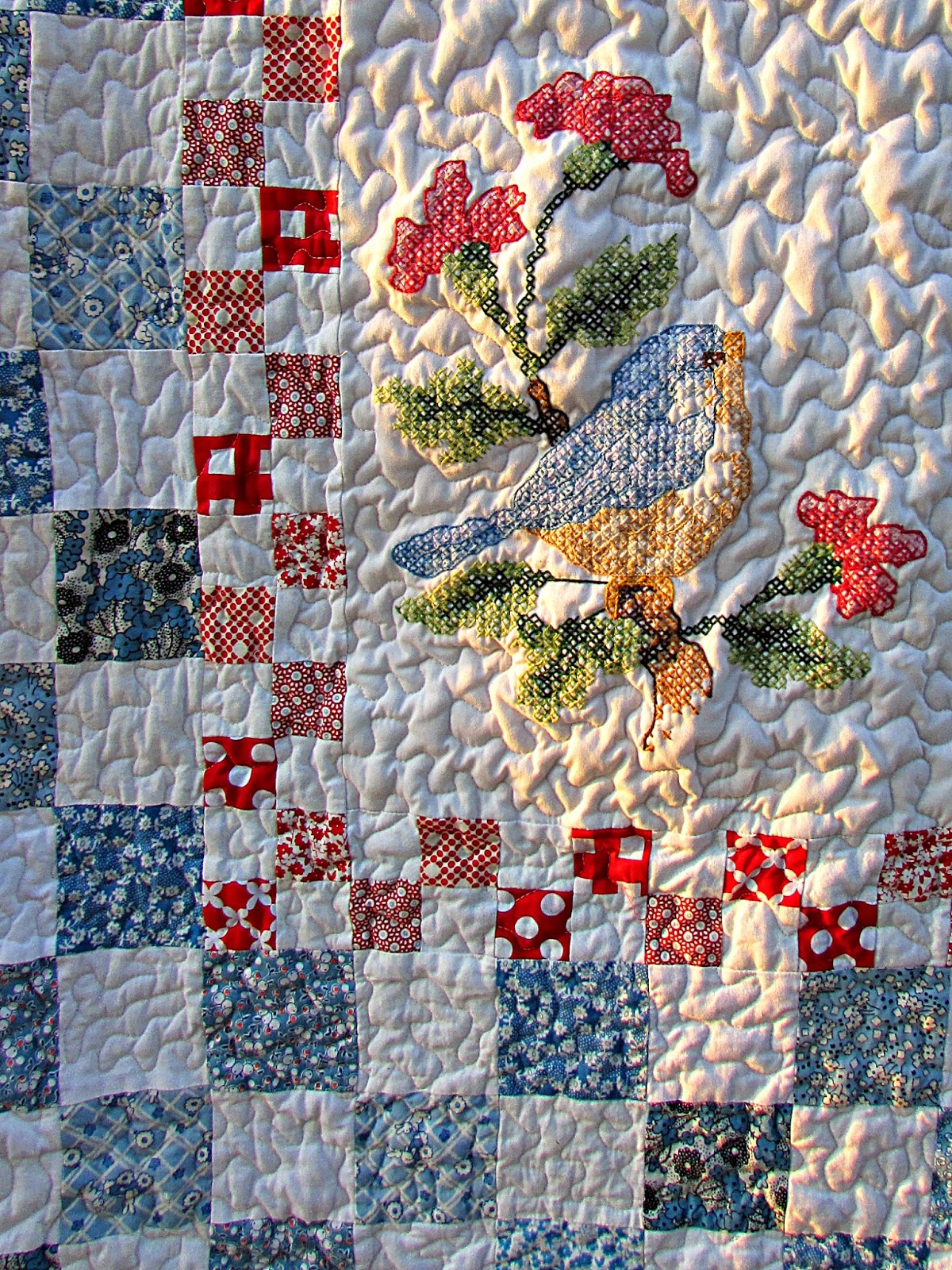 I had to think about what I wanted to do with these blocks for a week or two. Part of my problem is that I really, really, REALLY don't like sashing. It took me awhile to come up with something that could highlight and accent the bird blocks while simultaneously existing as NOT SASHING. In the end, I decided that a half scale repeat of the background pattern done in an accent color was more patchwork than sashing, so I went with it.* 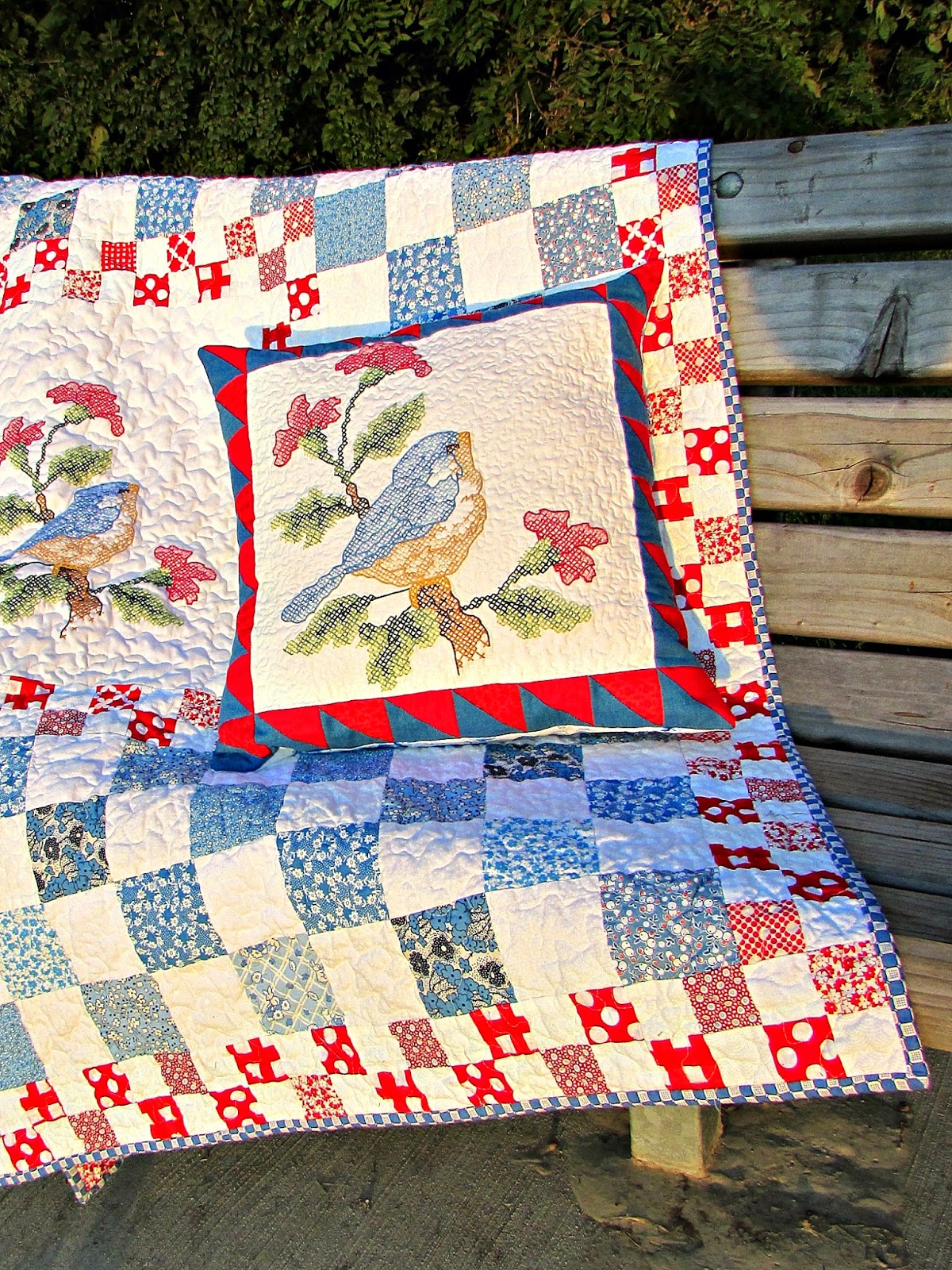 I set the birds in an alternating grid of 30s reproduction blues and tonal whites. Although the thread in the embroidery is more of a dusty rose, I chose a selection of modern cherry reds to surround each bird block and provide an outer border. I thought the quilt design needed a harder contrast than could be accomplished with dusty rose fabric. I am happy with the mix of colors and fabric styles and I don't think the bluebirds will be locked in perpetual combat with the reds. There's just enough white to tone it down and keep everyone happy. 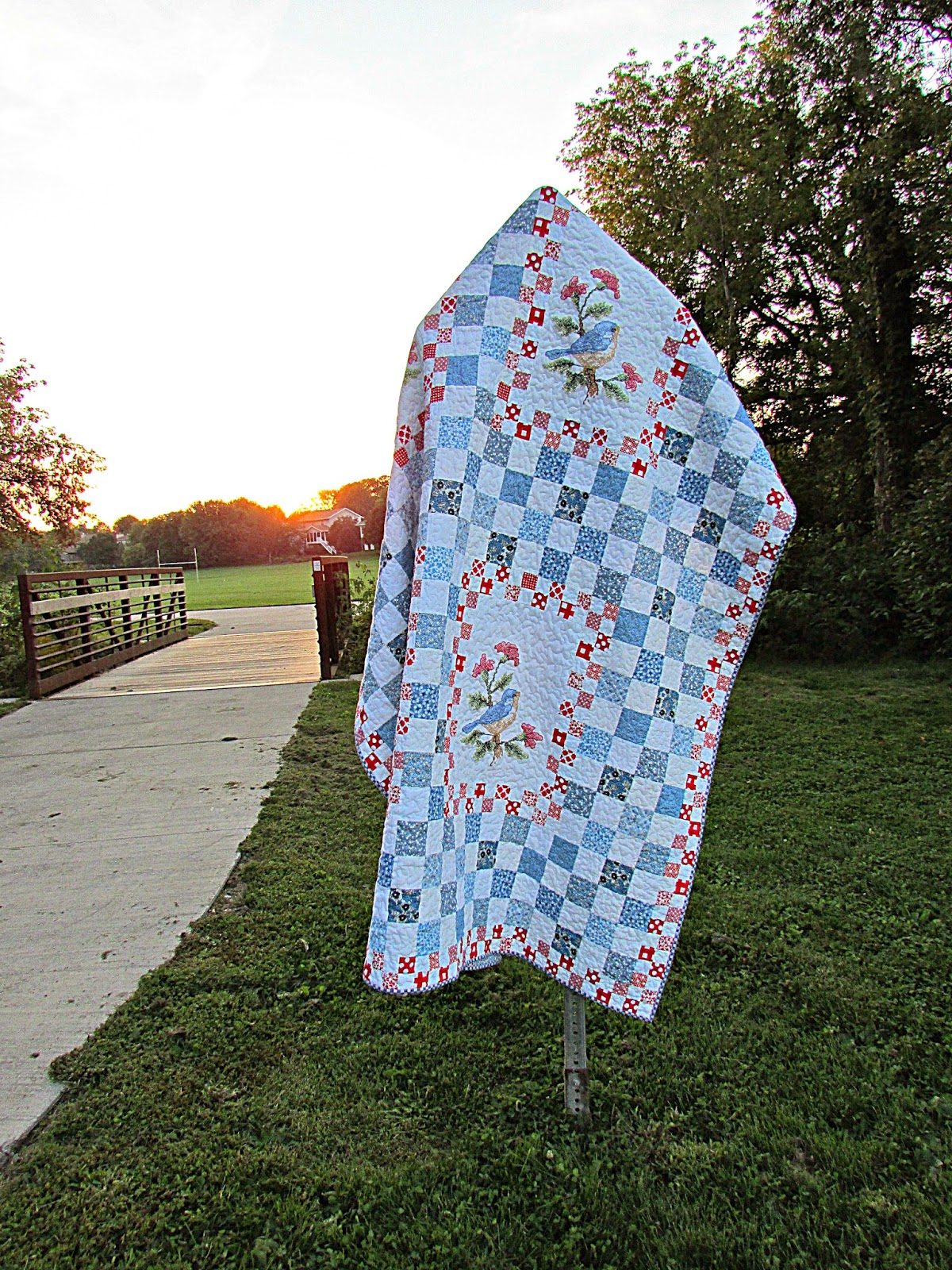 The bluebird block in the pillow was set in half square triangles in a blue peppered cotton and a fun red from Bonnie and Camille. I used a solid and a tonal solid (with no white!) so the pillow wouldn't just blend right into the quilt. I also parted with one of my vintage red buttons for the back closure. 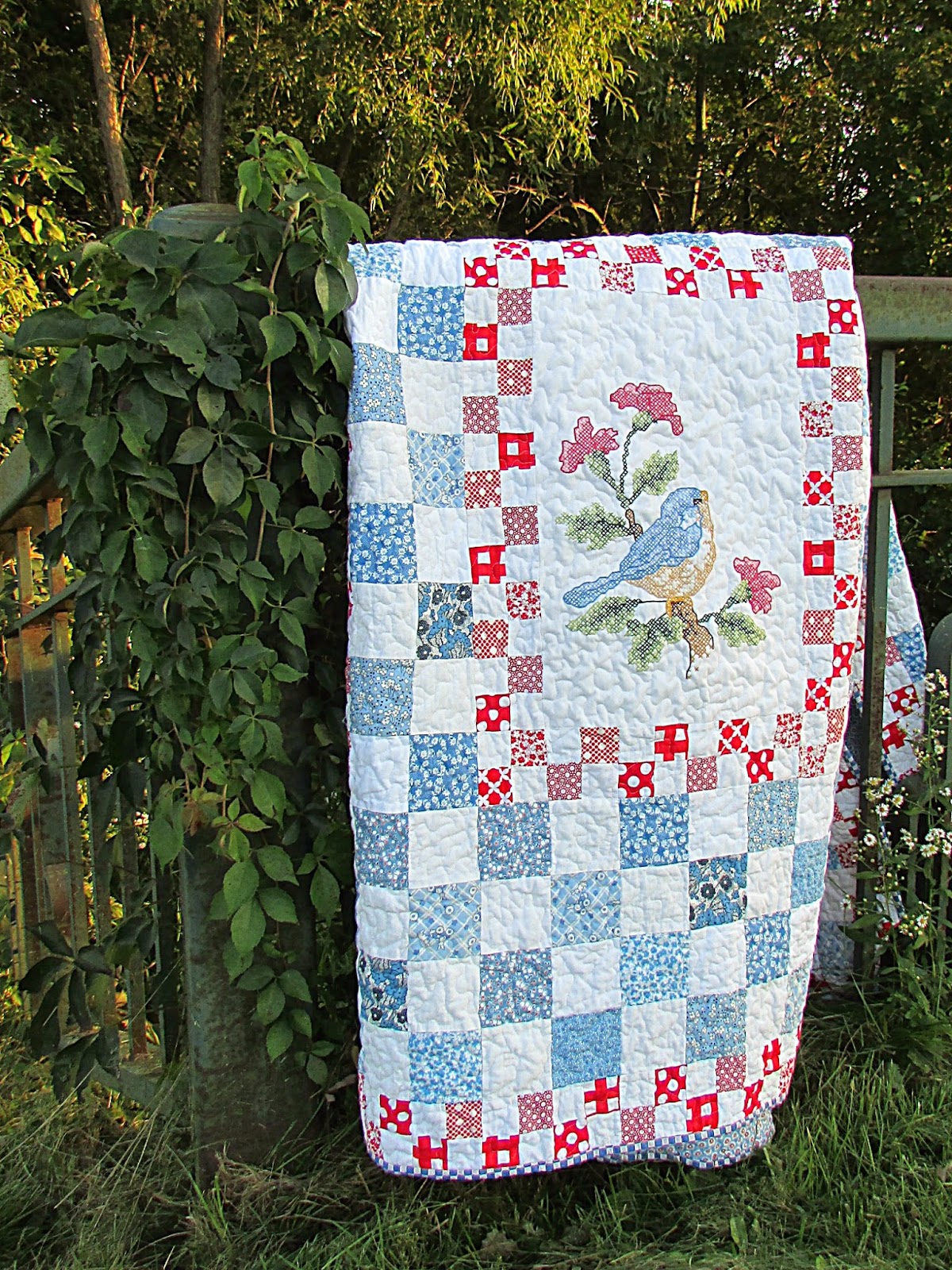 This quilt is headed back home to Idaho, where the deer and the orioles bluebirds abound. I hope you like it, Aunt Roselle!

*No sashing was harmed in the making of this blog post. And? That last quilt you did with sashing? I love it. It's awesome. Better you than me. :-)