Mustang in the Sky with Diamonds

I am married to a man who looks remarkably similar to John Lennon, so I guess I shouldn't be too surprised that I often have a Beatles soundtrack running through my head. I won't embarrass him by posting it, but I have a picture of him taken at LaGuardia airport after returning from a study abroad semester and backpacking trip across Europe. Pea green army coat, shaggy dark hair...you get the idea. 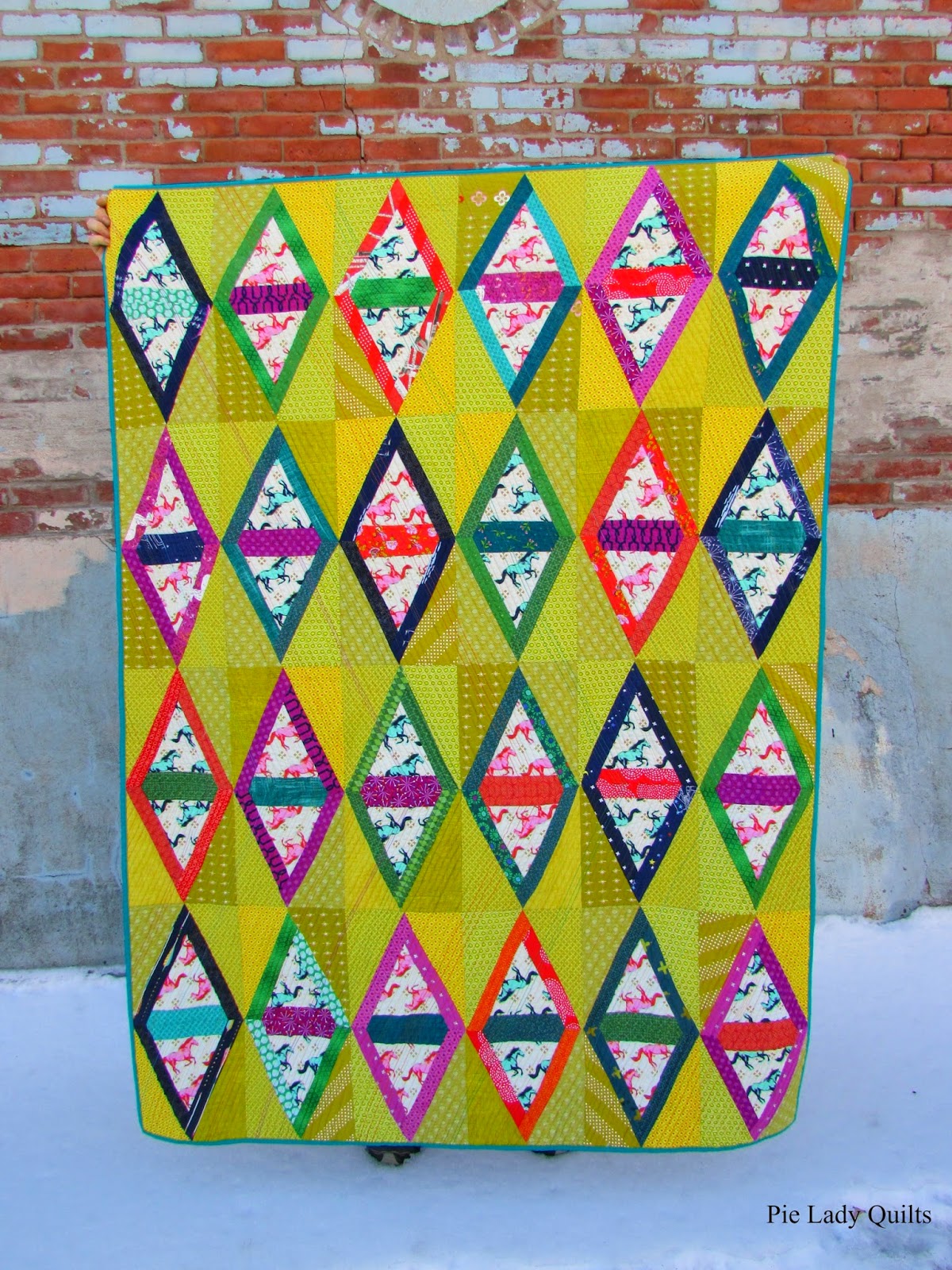 I was feeling pretty proud of myself when I had all the quilt blocks up on the design wall, so I dragged "John" in to take a look.

"Like it?" I asked, smiling at him expectantly. "I am going to name it 'Mustang in the Sky with Diamonds' after that Beatles..."

He may have a point. 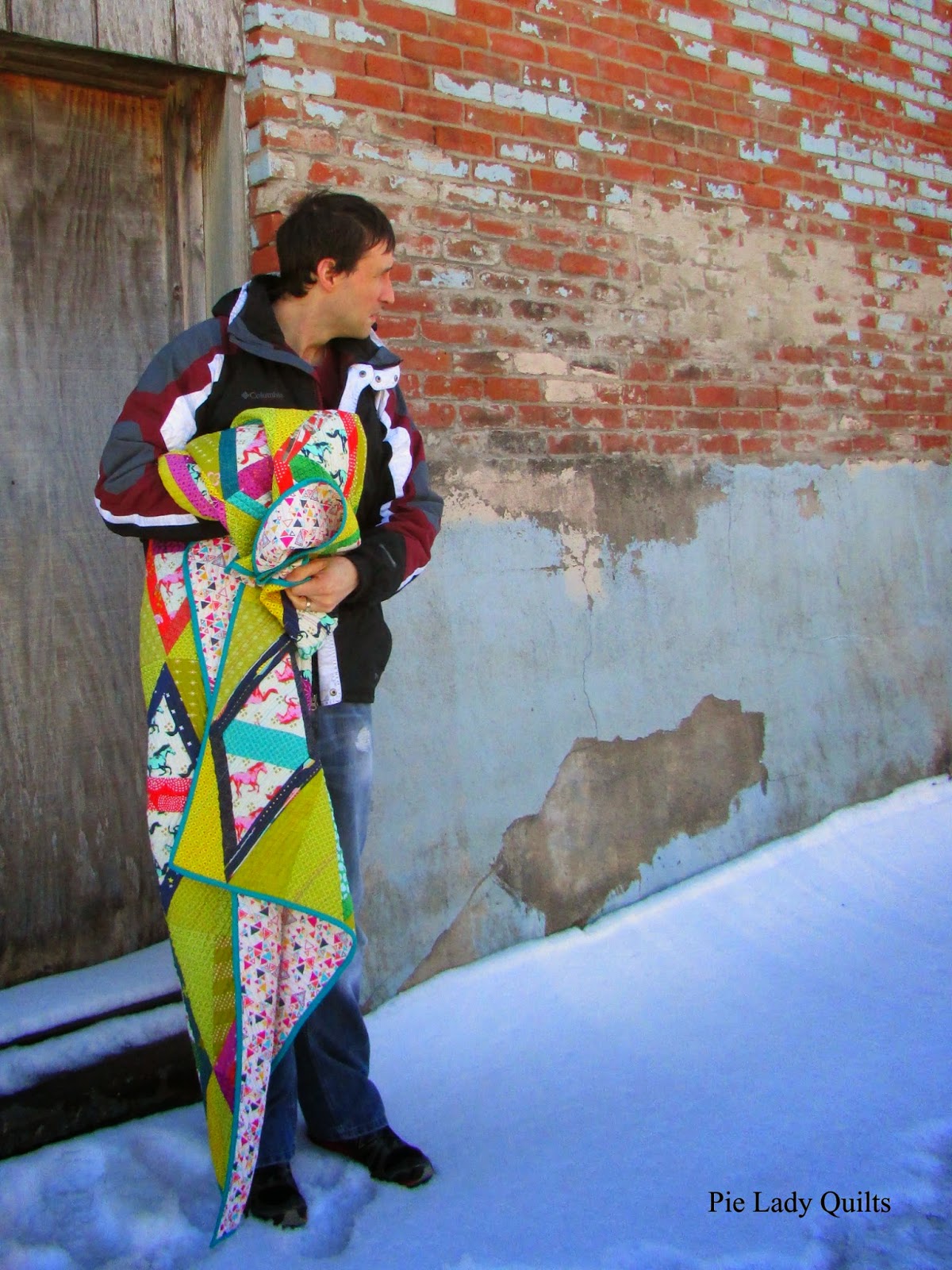 I started with the idea that I wanted to do another Mustang quilt, but this time with a more pop art feel (my first Mustang quilt was pretty western). I started with the idea for oversize diamonds, so I drew out this block on paper and made myself cutting templates. I chose fabrics from my stash in citron, orange, violet, teal and emerald in a quick burst of inspiration, but then stalled when I went to choose a background color. Finally I had a "what if" moment and laid out a block with a citron background. I am ashamed to say that my first thought was, "People are going to hate this!" Redemption came when I laughed and did it anyway. I added indigo blue to the mix for a little gravitas and went with it. 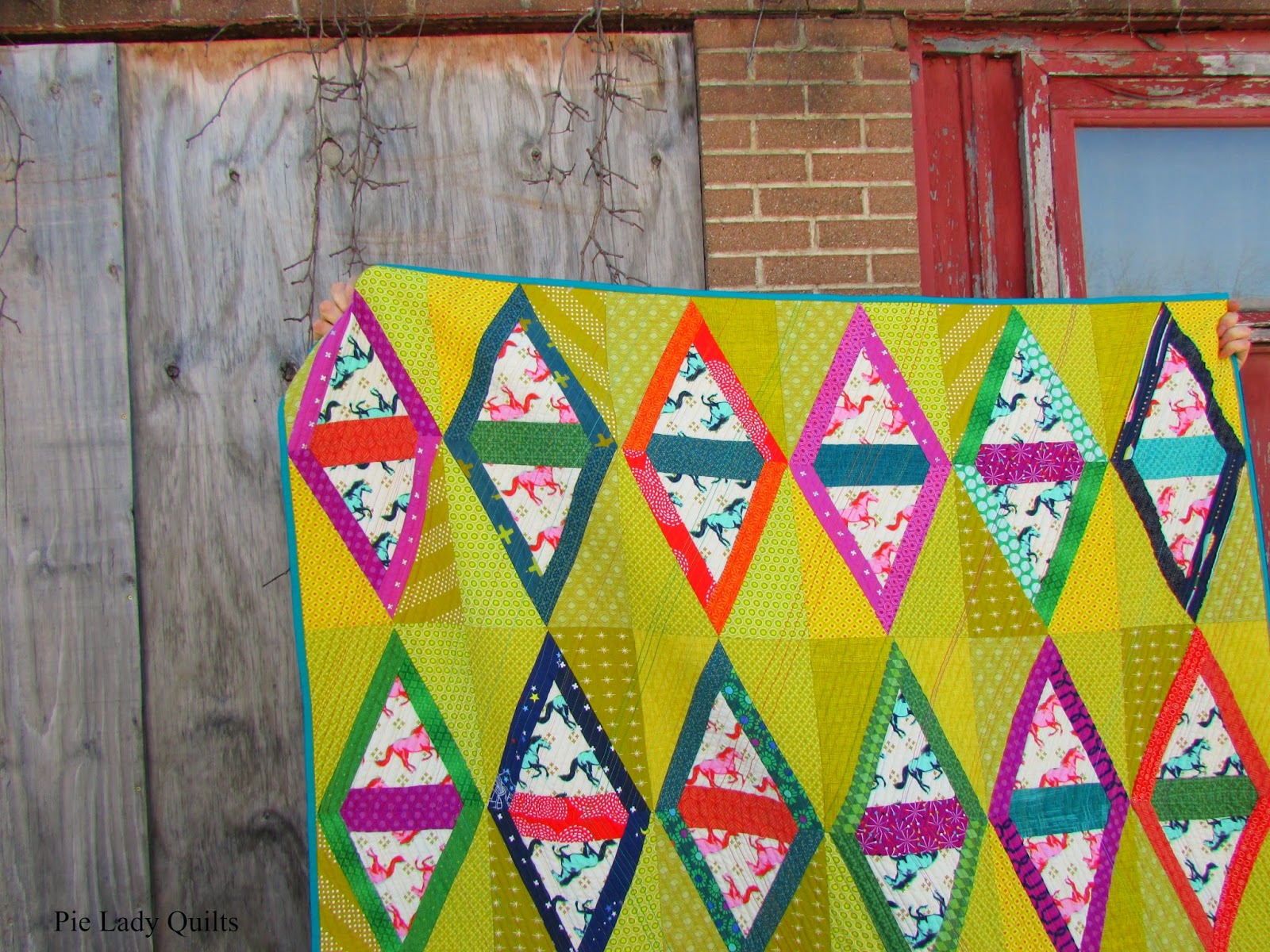 I went with it on the fabrics, too. I didn't buy one piece of fabric for this quilt. I chose fabrics from my stash for the color alone, so I have some interesting combinations. Unicorns, bees, text, arrows, flowers, ships, stars, pins...it kind of makes me want to burst into song just thinking of it!


"Picture yourself in a boat on a river

With tangerine trees and marmalade skies
Somebody calls you, you answer quite slowly
A girl with kaleidoscope eyes." 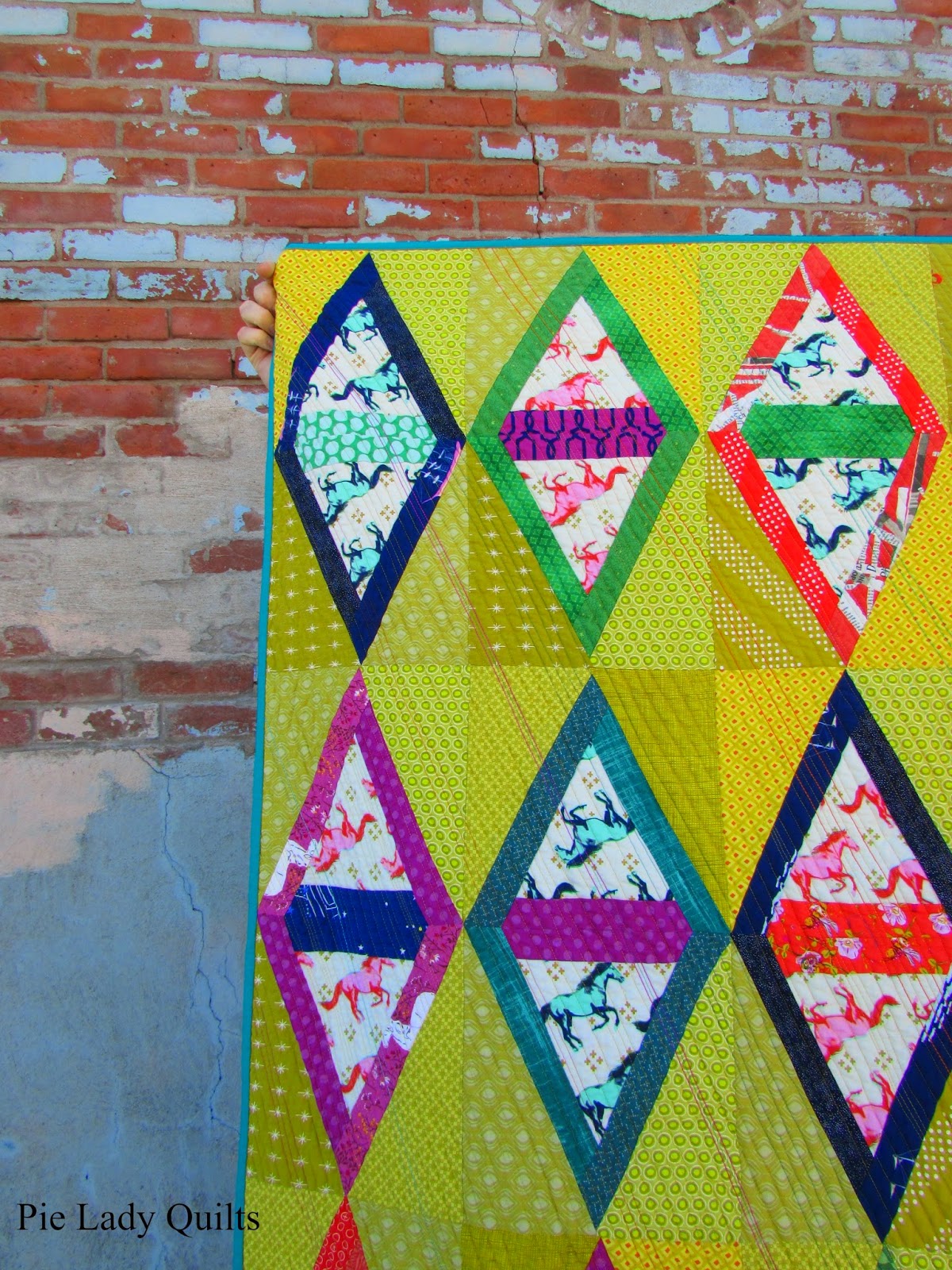 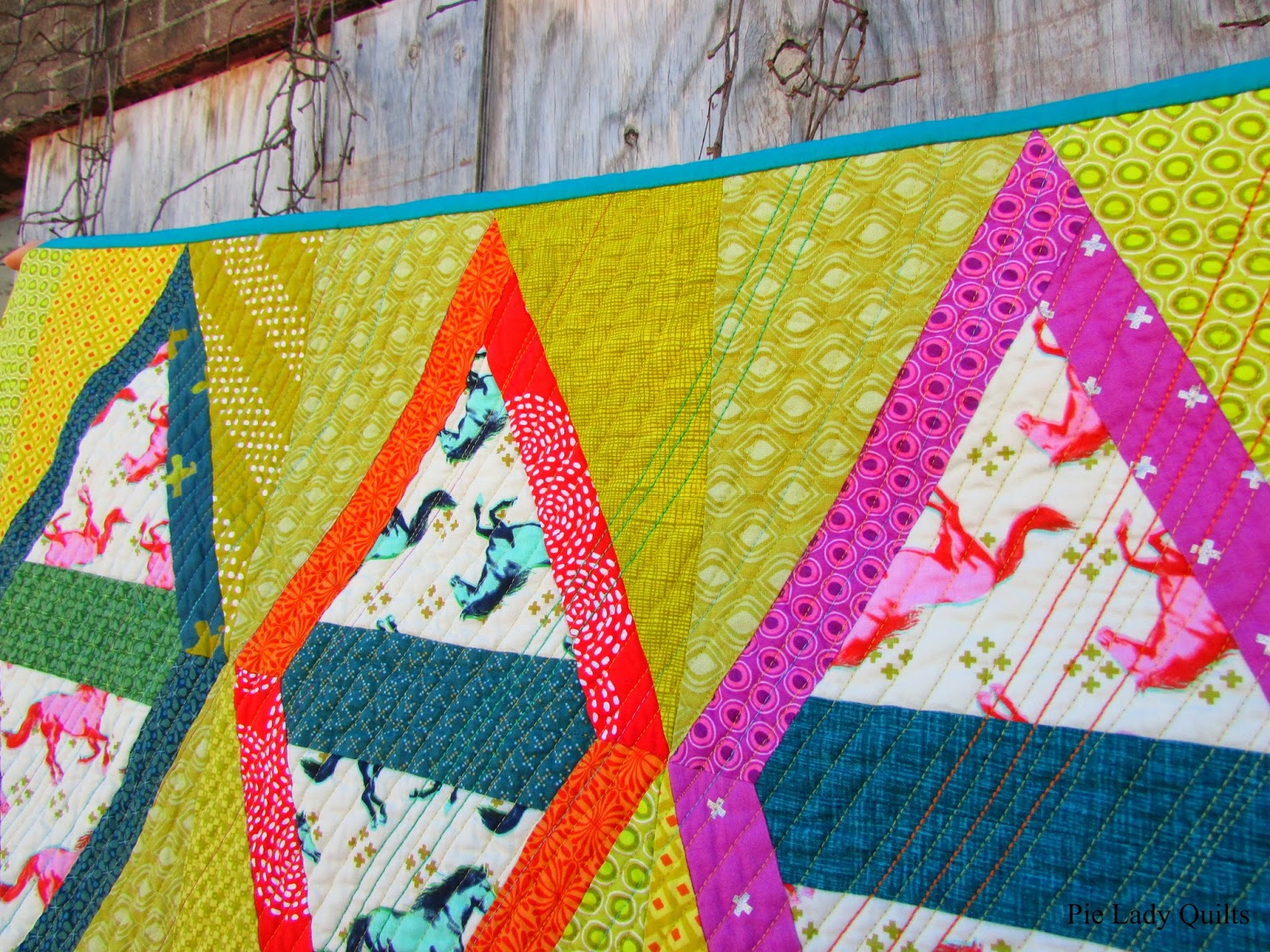 I backed it with Washi, by Rashida Coleman-Hale. 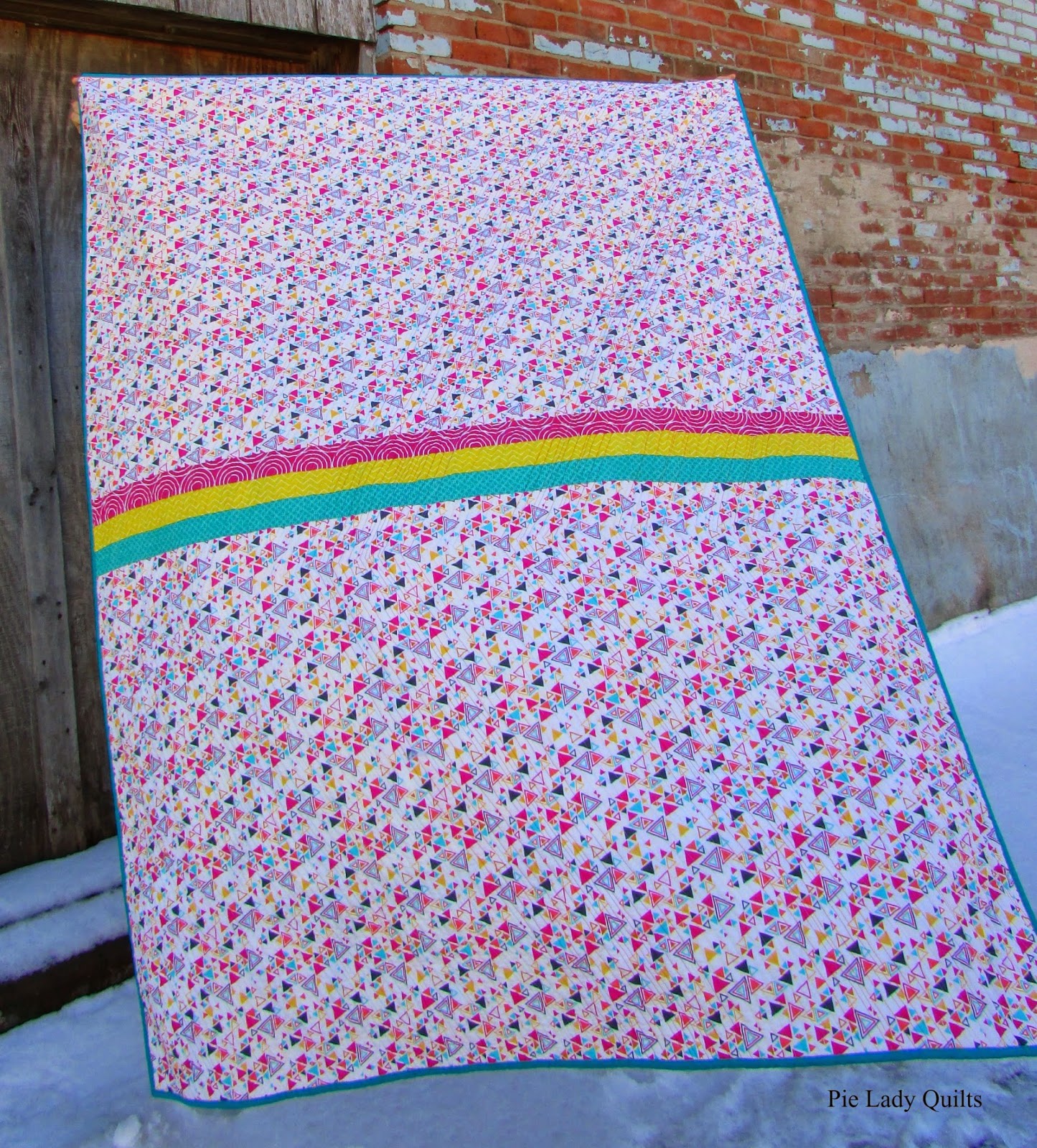 ....and just in case it isn't in your head already, here is Lucy in the Sky with Diamonds.

Linking up to Monday Makers, Main Crush Monday, Sew Cute Tuesday, Let's Bee Social and Can I Get a Whoop Whoop.